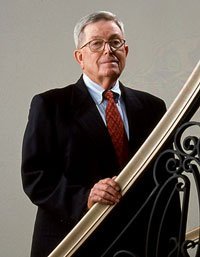 C. Kenneth Roberts graduated from The University of Texas Law School in 1951 and received his Master in Law in 1953. Following service with the U.S. Army, he joined the Exxon Company, USA (then Humble Oil).  There he served as an attorney in the Contact and Title Section. During his time at Exxon, he served in many positions, rising to become General Counsel in 1979, and becoming Vice President and General Counsel of Exxon Corporation in 1992, before retiring with distinction in 1995.

During his long, distinguished career he contributed to the legal community by serving as Chairman of the API’s General Committee on Law, in addition to serving as a member of the Board of Directors of the Landmark Legal Foundation and the Board of the Institute on Court Management and the National Center for State Courts.  He was recognized for his work in 1993 when he was named an Outstanding Alumnus of the University of Texas School of Law.

He was a long-serving member of the UT Law School Foundation’s Board of Trustees.  He became a Life Trustee of the board in 1993.  From 2005-2007 he served as Chairman of the Board.