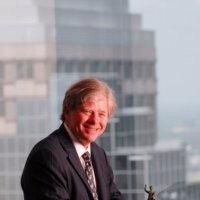 James V. Derrick, Jr. graduated with honors from both The University of Texas at Austin (1967) and The University of Texas School of Law (1970). Following law school, where he was a member of Chancellors and the Order of the Coif and an associate editor of the Texas Law Review, he served for one year as judicial clerk to the Honorable Homer Thornberry, United States Court of Appeals for the Fifth Judicial Circuit. For the next three decades, as a Partner at Vinson & Elkins, the Executive Vice President and General Counsel of Enron Corp., and the Managing Partner of the Houston office of Kelly Hart & Hallman, he advised United States and foreign enterprises on the legal aspects of business, real estate, and energy transactions. He led or otherwise played a major role in significant transactions in North America (including the Gulf of Mexico and the North Slope), South America, Europe (including the North Sea), India, and the Middle East. For several years he also taught as an Adjunct Professor of Law at The University of Texas School of Law.

Jim is a recipient of The Anti-Defamation League Southwest Region’s Karen H. Susman Jurisprudence Award, given annually to “an outstanding member of the legal community who exhibits a commitment to equality, justice, fairness, and community service.”

He is married to Carrin F. Patman, a graduate of Duke University and The University of Texas School of Law. Carrin is a retired partner of Bracewell LLP, the current Chair of the Board of the Metropolitan Transit Authority of Harris County, and a 2014 Fellow of the Advanced Leadership Initiative at Harvard University.