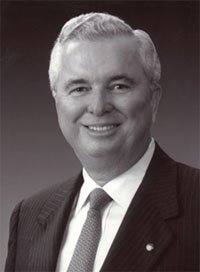 Upon graduation from law school, Mr. Newton was admitted to the Texas Bar and began his career at Wade, Wade & Newton in Beeville, Texas. He was a founding partner at Newton, Handley & Williams in Beeville. Mr. Newton later practiced with Clark, Thomas, Winters & Newton in Austin. From 1993-1995, Mr. Newton served as Senior Vice President and General Counsel for the American General Corporation. In 1995, he became Vice Chairman of American General. Since 2000, Mr. Newton has been actively involved in private investments.

Mr. Newton served three terms in the Texas House of Representatives, and was elected a Texas Railroad Commissioner in 1976.

Mr. Newton has an extensive history of charitable and civic activities. In 1979, he was appointed to The University of Texas System Board of regents, serving as Chairman from 1983-1985; has served as President of the Texas Exes, and has been Director for such civic entities as the Houston Museum of Natural Science, Austin’s Paramount Theatre, the Austin Symphony, and the Austin Chamber of Commerce, where he also served as Vice Chairman. In addition to being President of the Law School Foundation Board of Trustees, Mr. Newton currently serves on the Development Board for UT-Austin and on UT System’s Chancellor’s Council Executive Committee.

Mr. Newton lives in Austin and is married to Betty Sue Newton. He has two sons—Chris Newton and Wade Newton, and one step-son, Hart Hoover.