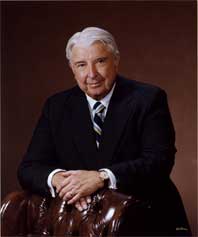 Kraft Eidman practiced law with Fulbright & Jaworski, L.L.P. in Houston from the time of his graduation from UT Law School in 1935 until his death in 1986, except for his service in the U.S. Navy during World War II. From 1973 through 1979, he was Managing Partner of the firm.

Mr. Eidman’s contributions to UT Law School are legion. He succeeded in executing a fair and workable operating agreement between the Foundation and The University of Texas. He instituted improved financial controls in response to the increasing size of the Law School endowments during his tenure and increased regulation by The University. Mr. Eidman supervised the restructuring of the Foundation staff and worked closely with the staff to implement new operating procedures. He improved and recast procedures for the management of loans and scholarships. He encouraged and brought about closer ties between the Foundation and the University of Texas Law Alumni Association, inviting the attendance of a representative of the Alumni Association at Foundation board meetings.

Mr. Eidman also spearheaded the Centennial gifts program, which resulted in the establishment and endowment of six chairs, thirty-one professorships, four visiting professorships, fourteen faculty fellowships, nine scholarships, six lectureships, and many unallocated endowments. The total Centennial funds raised in this campaign alone amounted to more than ten million dollars, and Mr. Eidman’s efforts also led to the substantial enlargement of endowments held by The University for the benefit of the Law School. Annual giving contributions doubled during his administration.

Mr. Eidman’s commitment to the work of the Foundation far exceeded the normal duties of his office, and is reflected in the current strength of the Law School’s endowments and its national reputation.

Kraft Eidman served as President of the Foundation from May 9, 1980 to November 9, 1984. Mr. Eidman’s dedication and vigor assured a continuing major role for the Foundation in support of The University of Texas School of Law.