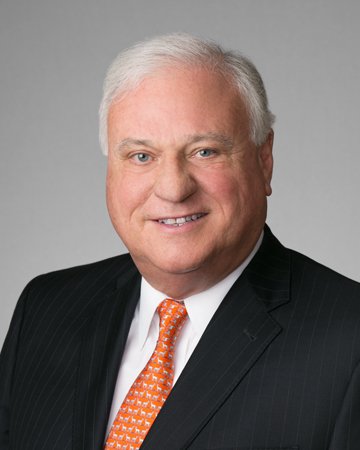 Robin began his career at Vinson & Elkins in 1971 handling insurance defense cases.  In 1974, he left V&E to form the full-service law firm of Wood, Campbell, Moody & Gibbs P.C., where he developed a trial group.  In 1983, Robin and those trial lawyers formed Gibbs & Bruns LLP, formerly Gibbs & Ratliff LLP, focusing its practice on all forms of high-stakes commercial litigation.

Robin serves as a Trustee on The University of Texas Law School Foundation.  He has served on the Executive Committee of The University of Texas Law Alumni Association (2002-2003); and was President of the Texas Law Review Association (1999-2000).  Robin was the recipient of the 2010 Dean Leon Green Award from the Texas Law Review Association.  Every fall, UT law students take part in the Gibbs & Bruns Moot Court Competition which is judged, in the final rounds, by Gibbs & Bruns lawyers.

Robin has received numerous accolades from peers, clients, and legal industry groups.  He was named to Legal Media’s World’s Leading Litigation Lawyers, as well as to the Top 25 US Litigators list by Expert Guides to the Leading Lawyers – Best of the Best USA.  Robin is listed on the Top 15 Trial Lawyers in US list by International Commercial Litigation, and is recognized as one of the US’s Leading Trial Lawyers by Legal 500.  Robin is named in The Best Lawyers in America for: Antitrust, Bet-the-Company Litigation, Commercial Litigation, Legal Malpractice and Securities Law; and was named Best Lawyers’ Houston “Securities Lawyer of the Year” 2012 and “Bet-the-Company Litigator of the Year” 2011.  Chambers USA named Robin to its Nationwide Top Trial Lawyers List and has recognized Robin as a Leading Trial Lawyer, since 2003, in the areas of Commercial and Energy Litigation.  Chambers Global names Robin amongst its short list of Top Trial Lawyers in the US.  He was named a “Go To” lawyer for Securities Litigation by Texas Lawyer; and is named a Leading Commercial Litigator in the World by Who’s Who Legal, The International Who’s Who of Commercial Litigators and Business Lawyers.  Robin was named a “Texas Super Lawyer” by Law and Politics, and has been named to the Texas “Top 10 Super Lawyers” and “Top 100 Super Lawyers” lists.  He is listed as a Leading Litigator in Legal Media’s guide Benchmark: Litigation.

Robin received the Karen H. Susman Jurisprudence Award from The Anti-Defamation League in 2008.  He served on the board of directors of Texas Appleseed, and is a long-time supporter of Communities in Schools and their legal summer internship program.   Another passion of Robin’s is the Chenailles Refuge in Costa Rica, a private 1100 acre wildlife refuge through which Robin and philanthropic partner Mary Nell Maloney established an environmental education program for children of all ages.