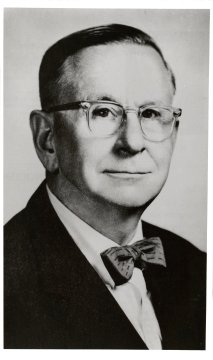 W. St. John Garwood earned his AB from Georgetown University in 1917 and his LLB from Harvard Law School in 1922. He practiced law in New York City and then returned to Houston to practice with Baker, Botts, Parker & Garwood, now known as Baker & Botts.

In 1929 he accepted the post of resident American attorney in Buenos Aires, Argentina for a large American oil company. He later returned to Houston and joined Andrews, Kelley, Kurth and Campbell, presently known as Andrews & Kurth. In 1942, Garwood was commissioned a lieutenant in the US Naval Reserve and sent to Tocopilla, Chile as US Naval Liaison Officer, and was later transferred to Santiago, Chile as Senior Assistant Naval Attaché. After two years service in Chile, he was transferred to the Navy Department at Washington where he acted as officer in charge of naval intelligence in Latin America until released to inactive duty in 1945, with rank of Lieutenant Commander.

After returning to Houston to practice law on his own, he was appointed in 1948 to Justice on the Supreme Court of Texas. His distinguished career also included his positions as a member of the Board of Regens of The University of Texas, President of the Law School Foundation from 1967-1969, and a Professor of Law at The University of Texas School of Law.