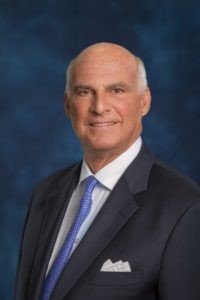 Douglas Y. Bech is founder/owner and Chief Executive Officer, since 1997, of Raintree Resorts International, a resort management, hospitality and vacation ownership company with resorts currently in 15 destinations in Mexico, the western United States and Canada.

Doug currently serves as director of two public companies, the non-executive Chairman of Consensus Cloud Solutions, Inc., and independent director of CIM Commercial Trust Corporation. Over the past more than 40 years Doug has also been a director of 11 different public companies engaged in healthcare, oil and gas drilling, refining and real estate and many private companies. Doug is also active in the American Resort Developers Association, serving on its Board of Directors since 2010.  In 2016, Doug served on the Governance Review Task Force for the Baylor Board of Regents and from 2017 to 2019 as Chairman of the Regents Selection Task Force for the Baylor Board of Regents. In 2019, Doug was appointed to the Board of Directors of Religious Freedom Institute (RFI), a non-profit organization based in Washington, D.C. Doug’s involvement with RFI was a result of his belief that we need to increase educational support for our First Amendment rights, which resulted in his gift to Texas Law School for the Bech-Loughlin First Amendment Center.

Prior to 1998, Doug was a partner of Akin, Gump, Strauss, Hauer & Feld, L.L.P., and, from 1970 to 1993, was associated with and a senior partner of Andrews Kurth, L.L.P. (now Hunton, AndrewsKurth).  Doug, while practicing law specializing in securities, corporate finance, M&A and master limited partnership transactions, was listed in The Best Lawyers in America. He received a B.A. from Baylor University in 1967 and a J.D. from The University of Texas School of Law in 1970. While at Texas Law School, Doug was an Associate Editor of the Texas Law Review.  Doug is a member of the State Bars of Texas and New York.

Doug and his wife, Sheryl, live in Houston, but have spent summers in Aspen for many years, and love to hike, bike and play golf, and spend time with their six grandchildren.