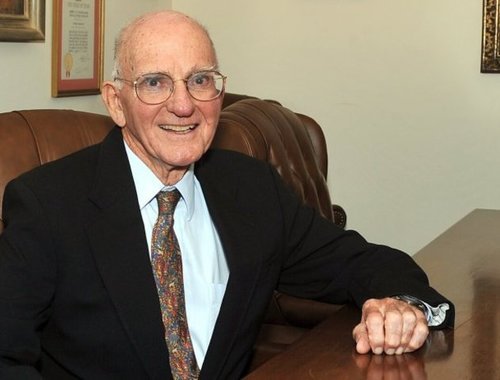 J. Mark McLaughlin’s association with The University of Texas began when he earned his B.B.A. in 1952 and his LL.B. from the University of Texas School of Law in 1954. After graduating and serving in the U.S. Air Force as a Judge Advocate and as an Assistant Attorney general of Texas, Mr. McLaughlin joined a law firm in San Angelo. His professional affiliations have included: Vice President of the State Bar of Texas, Fellow of the Texas Bar Foundation, American Bar Foundation, and American College of Trust and Estate Counsel.

Mr. McLaughlin recognized the need for such an organization as The Law School Foundation when he was a law student. Several of the brightest faculty members were lured away by institutions offering higher salaries because UT lacked the funding to support competitive salaries. As a student, McLaughlin made a small contribution to The Law School Foundation and has since continued his support on a greater scale. He has served The Law School Foundation as a Trustee since 1973 and was its President from 1988 to 1993. He was named San Angelo’s Citizen of the Year in 1990 and received the Distinguished Citizen Award from the Concho Valley Council of the Boy Scouts in 1993. In 1994, he received the Law School of Law s Faculty Service Award. He was also a member of the Texas Constitutional Revision Commission and a member of the Texas Board of Corrections.